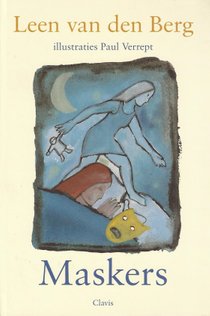 Jessica is on holiday with her parents on the isle of la Giudecca, the little isle near Venice. It is spring, carnival.

During the night, Jessica is woken up by the voices of her parents, quarrelling in the room next-door. She hears that they plan to get divorced after the holiday. ‘If you only would care as much about me as about that child!' she hears her mother screaming. Jessica concludes that she is the cause of her parents’ divorce.

She slips out of her bed, escapes from the hotel, jumps on a boat to Venice and arrives at piazza san Marco where everybody is feasting carnival. Angry, sad, helpless and feeling guilty, Jessica wanders during the whole night through this crazy city. She meets the most weird characters,  all wearing a mask. She meets Fiametta, a strange, old lady who carries an empty bird-cage and a translucent case along with her. She is the only person who is not wearing a mask in this city.

And there is Zanpolo, the Italian son of a Venetian couple who have a traditional workshop where they make masks.

Step by step, Jessica learns that nothing is what it seems to be, that everybody is hiding behind a mask because some feelings are too confronting to cope with. She learns that there is a difference between what people say and what they mean and that words can have different meanings. She understands that the sentence, screamed by her mother, has nothing to do with her. It is about her little sister, who died in an accident a year ago. Her father can’t stop thinking about his little daughter. And her mother doesn’t want him to speak or to think about her anymore. They can’t find a way to deal with their sadness and that is the reason of their divorce.

By what Jessica goes through this night, by the people she meets, the things she sees, a little black box is opened in Jessica’s head, a little box that she kept closed since the accident and that weights as a burden on her: she misses her sister but what is worse: she is guilty of the fact that her sister was killed in this accident. She never told it to anyone. Step by step her hidden feelings and thoughts are disclosed, with the help of Fiametta…

Topics: divorce - coming of age - guilt - Venetië - loss of a brother or sister