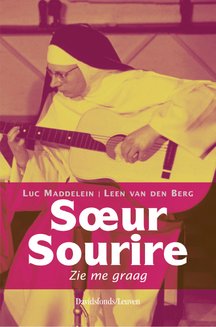 A literary novel on the tragic life story of the ‘singing nun’  Soeur Sourire. A nun, desperately seeking for fame and love.

The young, rebellious nun Jeannine Deckers has in 1963 a number one hit on the American billboard hot 100 with her cheerful song Dominique. In no time millions of her records are sold all over the world, in different language versions, from the States to Japan. But the star, an unknown Dominican nun, is not aware of her success outside the walls of the convent where she lives, near Waterloo.

When she finds out that her superiors kept the real  extent of the success from her and when they start to censor the new, more progressive song-texts she has been writing, Soeur Sourire leaves the convent and fights back.

It becomes an impossible fight against the convent and the record company, who enriched themselves by the success of her records. A fight also against the gossips, the press and the fiscal authorities who claim from her taxes on the income, acquired by the record sales, although she never saw a penny from that money while she was in the convent.

And, above of all, a fight against herself.

Forgotten by the fans all over the world and in poverty, she commits suicide, together with her one and only friend Annie.

With authentic extracts from her personal diary, a selection of her pictures and a discography.

The book has been published: